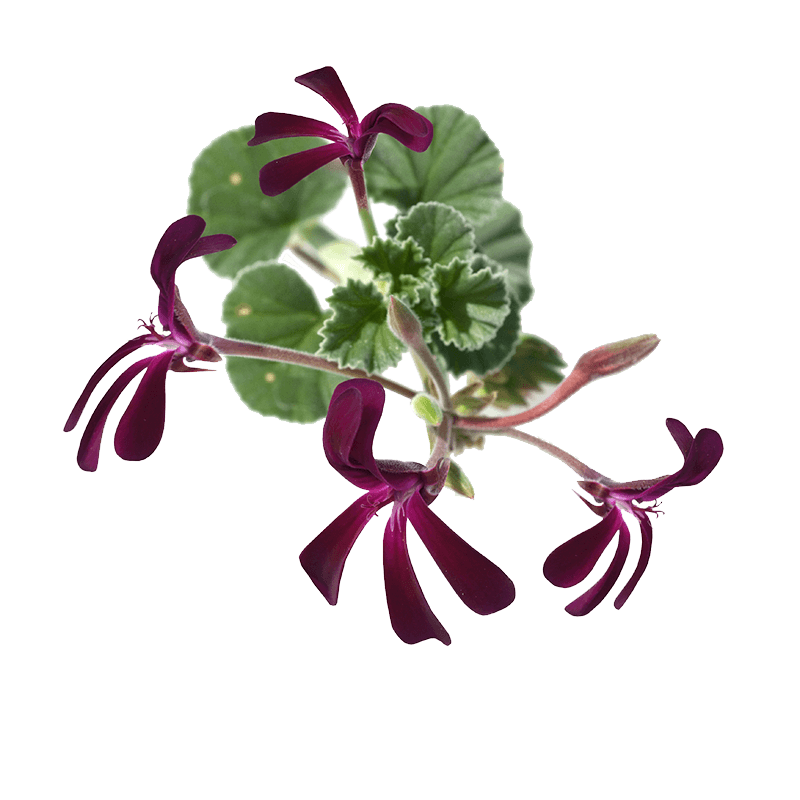 Pelargonium or cape geranium is a perennial plant whose shape resembles a rosette. Its grey-green cordate leaves are velvety in texture. As its name indicates, the plant belongs to the geranium family. It flowers all year and is characterised by flowers with five petals of which two are sometimes fused. Their colour ranges from purple to almost black. The height of the pelargonium can reach 20 to 50 centimetres.

Pastures of the rocky soils of South Africa.

The tuber shaped rhizome of the cape geranium has long been used by the Zulus, Bantus, Xhosas and Mfengus. The plant, known as ‘umckaloabo’ is still popular for the treatment of gastrointestinal disorders and is particularly indicated for respiratory tract infections, including coughs and colds. At the end of the 19th century, an Englishman named Charles Stevens was seeking a treatment for his respiratory tract disorder. To this end, he travelled to South Africa. When he returned home in good health, he declared himself cured of tuberculosis. The efficacy of the remedy for this disease, since then known as the ‘Stevens’ cure’, has never been proven, but the fact is that the plant used, namely pelargonium sidoides, aroused the interest of European researchers. Initially, it was used to treat acute bronchitis. Over time, it turned out that it successfully treated throat and tonsil inflammation, asthma, coughs, reduced defences, acute respiratory tract infections in general, and that it particularly suited children. 12 Young children’s immune systems are not yet fully developed. As such, they tend to catch frequent colds. More sensitive to microbes than adults, children therefore suffer more frequently from a high fever. In general terms, they can be cared for at home, and will feel better in two or three days. This is not always the case. In the event that their symptoms get worse or continue for an extended period, they must see a doctor. Most of the time, their symptoms are due to a virus. However, in children, viral infections are frequently associated with a bacterial form of bronchitis.3 The symptoms most commonly include a cough. This is explained by the entry of mucous into the bronchial tubes, which makes expectoration more difficult. 4 Thanks to its immune activation, its broad-spectrum antiviral and antibacterial action, its effect on a cough and its innocuousness, pelargonium sidoides is particularly suitable for children. The coumarin umckalin truly stimulates the defences. It improves the strength and effectiveness of the reaction of the white blood cells to pathogens. 5, 6, 7 Pelargonium protects the cells from infections caused both by viruses and bacteria by preventing them from adhering to cells before they are able to infect them. This action is due to proanthocyanidins. 8, 9 Likewise, a placebo-controlled study has established its powerful action against a cough, which results in reduced severity and frequency. 10, 11 When coming down with a cold, the importance of using the plant sufficiently early has also been noted. This promptness will not only alleviate the symptoms, but will also reduce the duration of the condition. As such, the patient will recover more quickly. Moreover, it has been proven that the treatment reduced recourse to medicines such as NSAIDs, paracetamol, and better still, antibiotics. In view of the increasingly concerning phenomenon of antibiotic resistance, this is a particularly important aspect. 12 The total innocuousness of the plant in children, even of a very young age, plays a crucial role. Thirteen placebo-controlled studies have not demonstrated any health risk. 13, 14 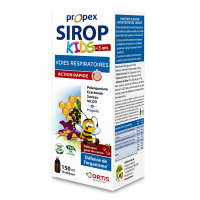